I'm back and a lot happier than when I spoke with you last. Winter is finally over and there is plenty of open water for us to paddle. This blog, I am going to reflect back on my first paddle of the season. It’s always a memorable one.

Winter already seems so long in Alberta, but it is even longer -way, way longer, as a kayaker. I wasn’t getting much sleep leading up to the season due to the excitement and anticipation of getting out. As I tossed and turned in bed, I would have the same feelings as a child anxiously waiting for Santa at Christmas. I was so excited to be able to get out there. 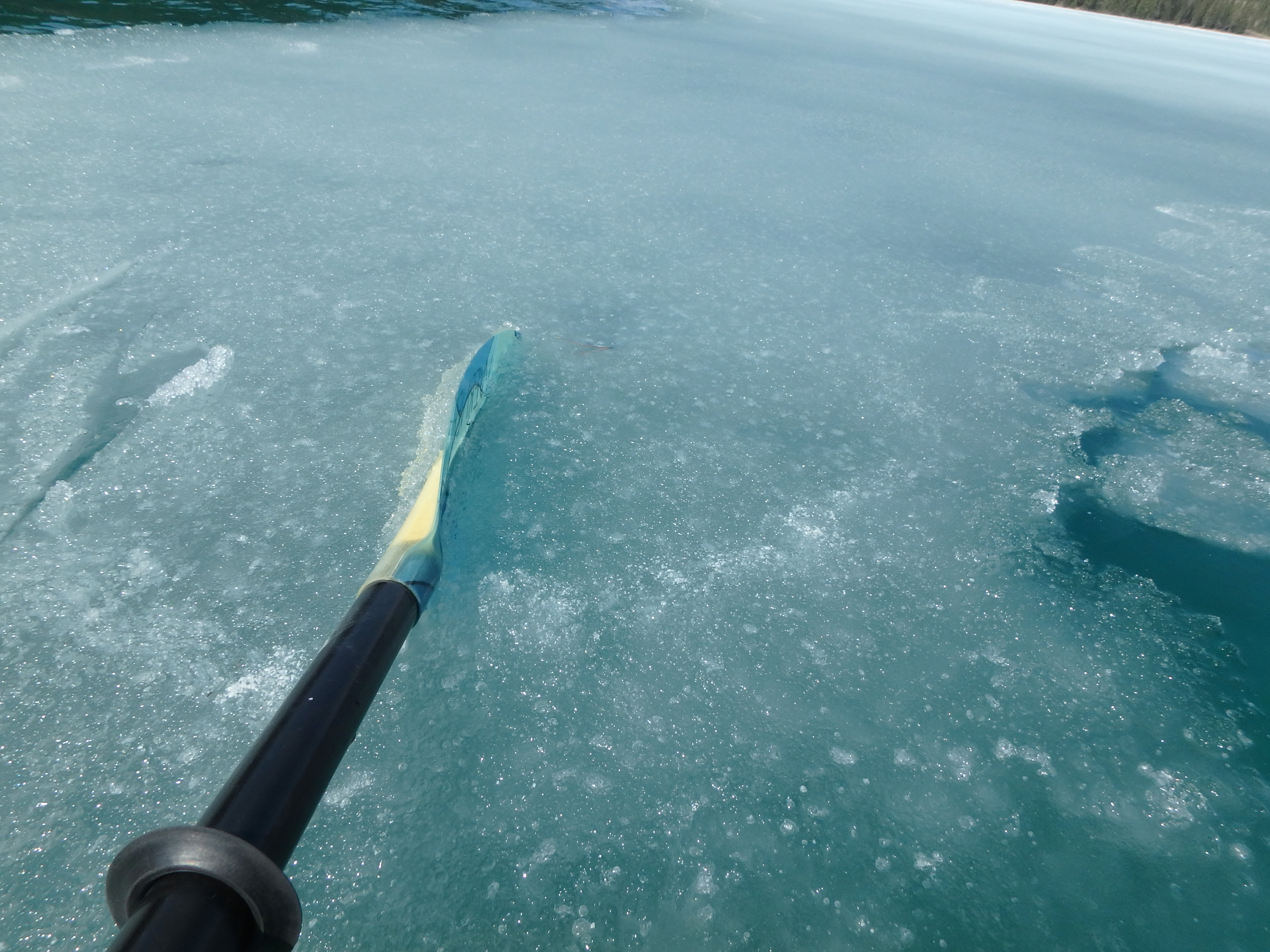 Ice on the Lake

One of my favorite things in the world is to be out on the water in a kayak. It's almost an odd feeling. A sense of calm and an awareness of reality at the same time. The beauty, serenity, calmness and a sense of belonging can only be understood by those that truly appreciate it. When paddling with others there is a great sense of brotherhood and sisterhood. No words need to be spoken between us for long periods of time. All that is needed is just a true appreciation of being out there. Graham trying to paddle through ice

My first paddle of the this season was on Apr 28, on Two Jack Lake in Banff with my buddy Graham. The main body of the lake was still frozen, however, except along shore, about a 2.5 km stretch of the south canal was ice free. Still some ice along the shore

It may not seem like much, but after a long winter, the Mountain Lakes are one of the last places to thaw. The whole spring leading up to this I found myself staring at small collections of water in the ditch and thinking, "I can paddle that." So, even this small sliver of open water was most welcome!

We couldn't launch at the designated boat launch as that part of the lake was still solid ice. We ended up launching at the south campground. It was still closed for the season though and the gates at the road were closed, so we just parked in front of the gate and had to drag/carry our kayaks to the water. It was a good half kilometer distance before we could find a safe launch site as there was still a lot of ice along the shore. When you are getting ready for the first paddle of the season, non of that really matters and the distance doesn’t seem so long. It wasn't until the end of the day when we had to do it back again that we realized just how far it was. Needless to say, it was all worth it. Finally on the water. Such a peaceful feeling surrounded by the majestic mountains.

My kayak and I had dreaming about this for a few months. It turned out to be a beautiful sunny day with just a light breeze. We paddled around the ice that was still on the main part of the lake and up and down the canal. The scenery was spectacular. We had the lake to ourselves as the tourist season had not yet begun. We did meet a couple of people on the water on SUP's that obviously had no respect for the conditions. They had no lifejackets and were just wearing shorts and t-shirts. It bothers me to see that. Yeah it was a warm day, but the water was only 4 C. This type of behavior is a recipe for disaster. Doesn't take much for things to go wrong. I felt very secure wearing a dry suit.

At the end of the day I jumped in to the water (as I have made a habit of doing) to check if what I was wearing under the dry suit was good enough for the conditions and how long I could last before the cold water starts to have an effect. My actual set-up is a Kokotat Hydrus Whirlpool Bib Pant mated with a Kokotat Dry Top. It's one of those systems where you just fold them together at chest level. I lasted for about 30 min in the water. I had a bit of a leak in the suit where it’s sandwiched together and my kidneys were starting to get cold as that's where the leak was. Otherwise I might have stayed longer. Most of my body was warm and comfortable (although my hands were freezing). I am looking forward to getting a proper full dry suit, but this setup was affordable at the time and has served me well. I have experienced that leak before. If I have someone help me roll the two pieces together it's a lot better. By myself I just can't get it tight enough in the back. It's still a lot better and safer than nothing at all. It was just great to finally get out on the water and I have done numerous paddles since that first day. One final word on this trip. I guess I was a bit too excited to get back on the water as two weeks later I received a photo radar ticket for speeding on that day. Bummer. However I blame my Dagger kayak for this one. I was going to contest it on grounds that I haven't kayaked in a few months and should therefore not be held liable for whatever happens. However, it's pretty hard to do when the photo clearly shows my van with my kayak on the roof clearly flipping the bird to the camera! Until next time. Hope too see you on the water! May your blades stay wet and your butts stay dry.